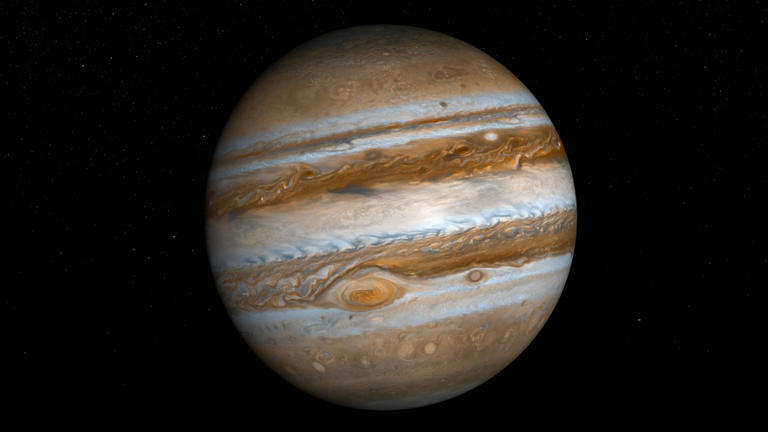 Jupiter is about to get as close to the Earth as it has been in decades, so stargazers are in for a treat.

Despite being the brightest planet in the sky on a regular basis, Venus will be eclipsed by our solar system’s largest planet during the course of the next month.

In reality, Jupiter, which is a bright star in the dusk east, may have already come into view.

Jupiter has been getting brighter and brighter lately shortly after sunset.

This is because on September 26 the planet will be in “opposition” to the Earth.

The Earth and Jupiter’s orbit are expected to be closest to one another at that time than they have been in the past 70 years.

What is an opposition?

The Solar System’s planets all revolve around the Sun. The Earth occasionally travels in an orbit where it is directly between the Sun and another planet. That planet is considered to be “in opposition” at this exact moment.
The Earth, for instance, is positioned between the Sun and Jupiter when Jupiter is in opposition. As a result, when the Sun sets in the west, Jupiter appears in the east since Jupiter lies on the “opposite” side of the sky to the Sun.

It’s a great time to view and photograph the gas giant for astronomers and astrophotographers.

How can I spot Jupiter in the sky?

Keep a look out from sunset onwards for Jupiter because it will be at its largest and brightest during opposition and will be visible for much of the night.

The sun will set in the UK around 6.50 p.m. on Monday, September 26, according to Sunset Times.

The Met Office predicts that the rain will quickly move from the southern portions of the country before most places experience a mix of bright intervals and blustery showers. In cold northwesterly winds, I feel cold. Therefore, you might wish to dress warmly and keep an umbrella close at hand when stargazing.