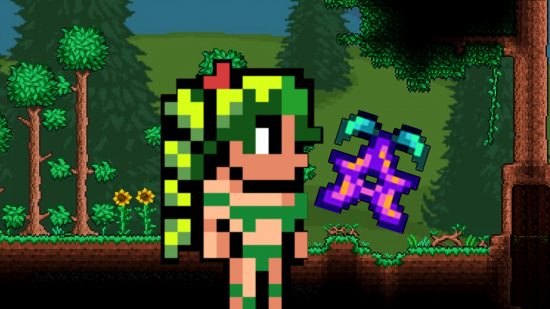 Fans are delighted by an unexpected Terraria crossover that unites two of the top PC sandbox games that was uncovered in the Terraria 1.4.4 update Labor of Love. The Terraria Labor of Love patch notes included a list of some collaborations, like the Core Keeper Terraria crossover, while other collaborations were left unlisted. Therefore, use this as a spoiler alert for this particular update to one of the best crafting games, though we’ll take care not to reveal anything else of great importance.

Thanks to the well-known farming game Stardew Valley, this special independent crossover offers two different pets to catch. Yes, with Terraria’s most recent update, two of the most popular independent sandbox games have finally met, and you may now get your hands on a Junimo pet as well as the very rare Blue Chicken from the ConcernedApe game.

You must first go fishing in order to obtain the Junimo, one of the happy forest spirits located in Stardew Valley’s Community Centre that aids the player in thwarting the plans of the expanding Joja Corporation. The Dryad NPC will tell you that “This unnatural beverage has a connection to another realm” and offer to purify it if you’re fortunate enough to find an empty can of Joja Cola. By doing so, a star-shaped portal is unlocked, allowing you to briefly view Stardew Valley. You are also given a Stardrop fruit, which can be used to call the Junimo.

The other pet costs 25 gold and is a little easier to acquire thanks to Terraria’s Traveling Merchant. Surprisingly, it’s a Blue Chicken Egg that will call a Blue Chicken pet to your side. The tooltip also mentions that “The name tag says ‘Shane,'” a reference to the fact that in Stardew Valley, the elusive Blue Chicken can only be acquired by developing a strong friendship with resident Shane.

As there is so much in the patch, even though it looks like most of the hidden secrets have already been discovered, it’s probable that there is still a lot more to learn. It is unknown what further mysteries Terraria’s Labor of Love update hides. In particular, updates like the new Terraria biome and liquid have the astounding potential to conceal even more cunning plans.